Time is flying by! At the end of February, Kenneth presented his workshop on gesture drawing and it was well received.  We had a good turn-out and everyone seemed to enjoy the process, atmosphere, and instruction. Those of you that missed it also missed me modeling for the first time in … well … a while … I won’t say how long ago that was. (I do believe that there are photos of the workshop on the Outpost’s site.)

My first workshop will be this weekend, Saturday the 21st at 1:00 pm. I will be doing a basic introductory to Stack-laminating which is the process that I use to create my large vases. Come join us or just stop in to take a look at the process. The weather forecasts look VERY good, the market will be going “big guns”, and there are several good choices for lunch. I’ve attached a photo of a small maquette that I was playing with in search of inspiration … 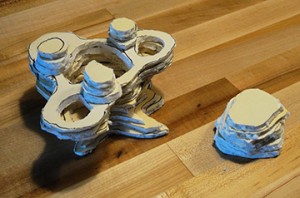 Meanwhile, in between these two workshops it feels like a regular circus around here. Once the weather finally broke and we could dependably get out, then the pace quickened to a slow steady run.

March 11th, a friend picked me up and took me to his business where I was given a trailer to load and permission to take “almost anything”. Here are a couple of photos: 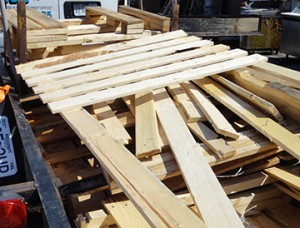 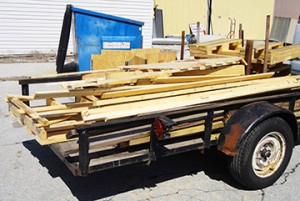 That night we had the pleasure of dinner at a Chuck Travers’ house, Jeff left before I remembered my camera, so he is not in this photo. What happened was that his patient (and probably lonely) pregnant wife called about getting some “Moose Tracks” (ice cream aficionados and husbands of pregnant wives all know what Moose Tracks is). 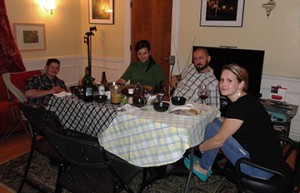 March 12th, Thursday, we went as a group on another “pick”. This one was a round the counties type spin, courtesy of a couple of the vendors at the Farmers Market that responded so favorably to our plea for “old crap.”  All of us forgot to take photos while we were looking at all the great stuff. But we do have a few that we posed for and maybe Ankica & Jeff will share theirs.

I did talk the crew (which included both of Jeff’s wonderful little preschool brats, just kidding, the kids were angels) into stopping at the MO. Dept. of Conservation’s fish hatchery in Chesapeake on the way back. I just wanted to spend a half hour looking at tanks with thousands of small fish, but I think our guide Allison wanted to make sure that we didn’t miss anything. I enjoyed it and I hope my fellow artists did as well, but I fear that they may not fully trust me now. However, Ankica did have a boat-load of literature and pamphlets when we left, so maybe I didn’t inconvenience them too much. It’s a cool facility. 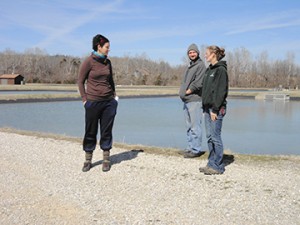 Now it’s time to head back to the studio, I will try to remember to bring take some current photos … it does not look at all empty anymore.